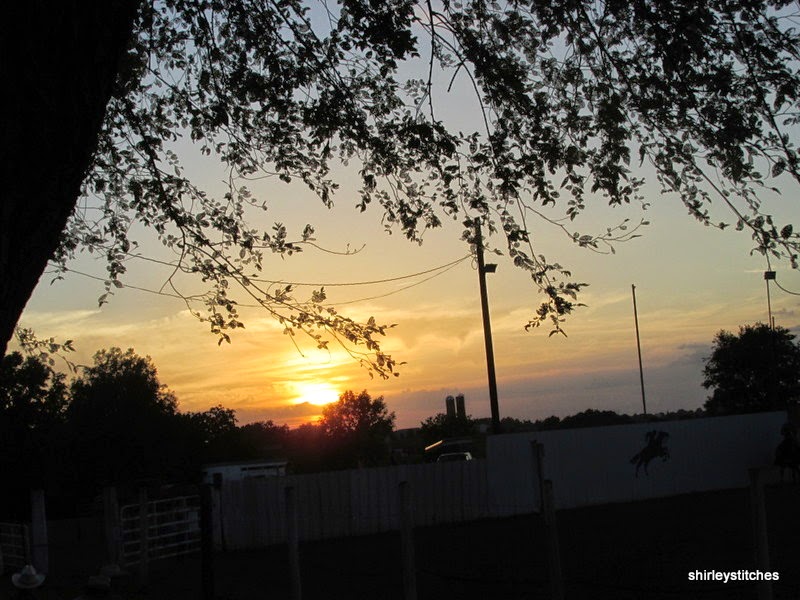 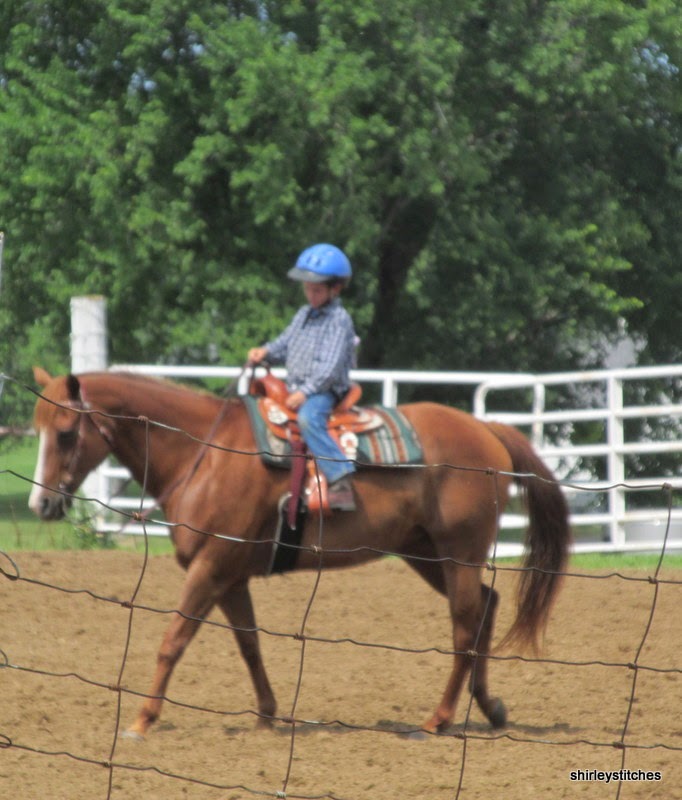 My sunset at the Horse arena Saturday evening while I was watching the games. It was hot. I left for a while in the afternoon because it was to hot. I didn't get accomplished what I went for. I was trying to deliver a custom order, but didn't get the job done either Saturday or Sunday so I put them in my etsy shop. I told the customer  that she could purchase them there. She had a chance to pick them up the weekend before and didn't. I was trying to be nice.
The boys showed Sunday which was cooler then the day before. We had Cowboy church before the show started which was to benefit those who wanted to show, but didn't want to miss church. It was a good service.
Sunday was a better day until the storm came through in the afternoon, but it was fast enough moving that we got to finish
the show. Only one accident which ended up with a girl having a horse fall on her. She ended up with a concussion. The horse was o.k. It got up and stood right beside her as though it was protecting her until help came. We were lucky to have some people that show who have medical experience one way or another there, but when she didn't know the day or where she was at it was a trip to the hospital.
My grandson and Fergie got first in his group. He is really in his own world making sure he was doing the right thing. He even took himself down to the gate to wait for his event. He told us that he was ready. His dad asked him if he knew his pattern for his trail event later. He says yeah and started telling dad what he had to do. He loves to ride.
My youngest grandson's ball team won Friday night 18-4. They went undefeated for their level. We are so proud of them. They will play in the tournament next month. Who would believe it is almost the end of June? Does anyone know where the month has gone. It seemed like it just got started and then it was gone.  It has been very busy for me to where I just haven't had enough hours in a day to accomplish everything I wanted to do.
Hubby hasn't been feeling good which has been a concern. I am trying to figure out if it was due to medication or if we had another problem. He was a little better today when I went to see him, but yesterday I should have stayed home with all of the sleeping that he did. They even checked him to make sure the blood oxygen and blood sugar was o.k.and he didn't even know it. With a liver that only works part-time meds can build up in his system. I know the ammonia level is higher then it should be. We just keep working and praying each day. I want to thank those of you have been praying for us. I know that is what has got us this far.
I talked to my oldest tonight. He is working Baytown, Texas until after the 4th and then he doesn't know where he is going next. He doesn't mind traveling if it means working. He said that it was storming down there. We had some storms pop up and looked bad, but didn't go ahead and materialize.
Hope you all are doing o.k. with the crazy weather and staying as cool as possible. It is hard I know.  You all take care. I am being chauffeur again tomorrow. We were hunting for a new tire for my sons riding mower.

Latest at My House 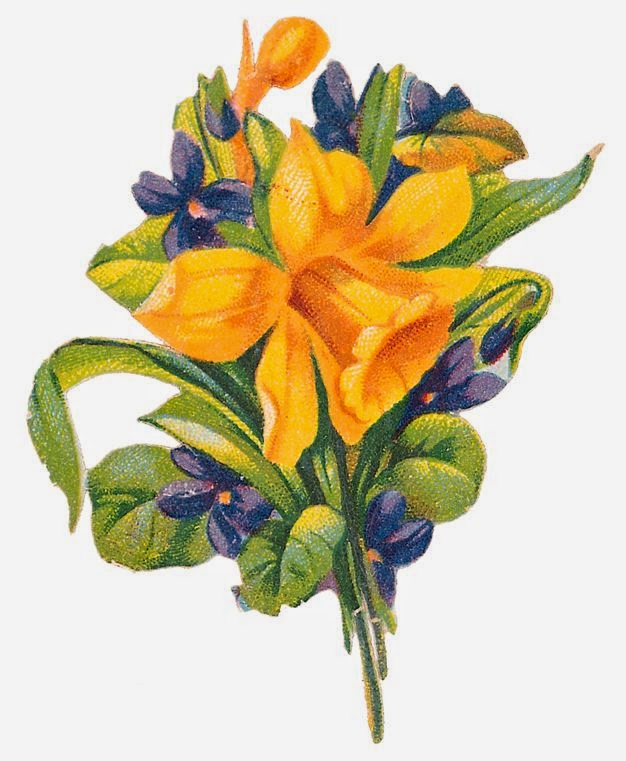 I have been away from the computer for a few days with other things happening in my life. It has been rather hectic schedule with not everything getting finished that I want done. I have been stopping by when I could , but when you are not on your computer you don't leave comments very well or at least I don't.
The rain and storms haven't helped the horse showing. They got cancelled so we are hoping to get this weekend in, but it remains to be seen. The weather has been so unpredictable. 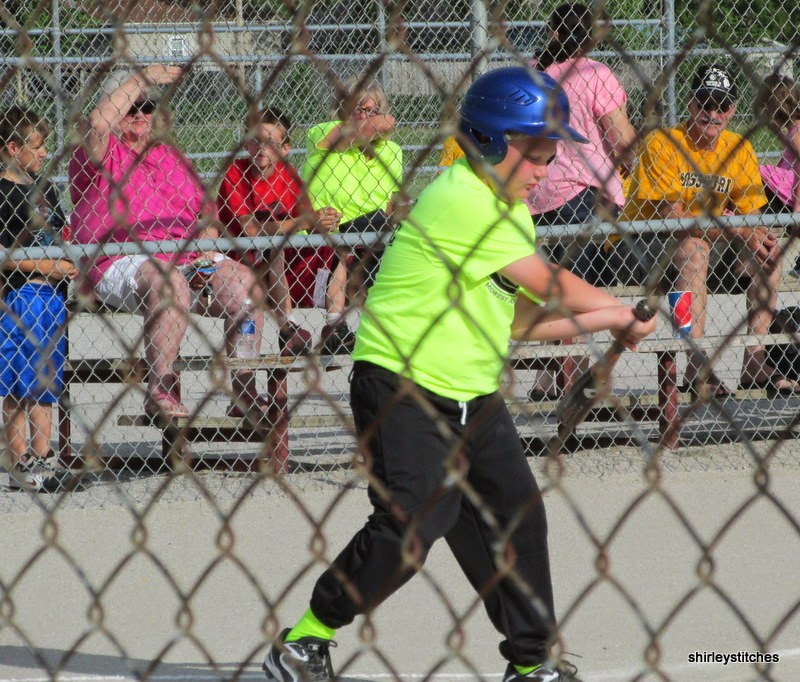 Tomorrow I am chauffeur again taking my oldest and his adopted brother out to throw hay bales. His mom or who they are working for will see that they get home. I just hope that they don't get to hot. It has been very hot and windy in our area.
Our youngest grandson's baseball team is still undefeated. They have played really well this summer, but then they practice at least twice a week.They just don't go and play their game. Their last game is Friday night then the following month they are going to play in a tournament. He is having an enjoyable summer and he is getting so tall. He is Mr. Personality and talks to everybody. I don't know if that is good or bad. We just try to watch where he is at when he is not playing ball.
Our oldest son is headed for Houston in the morning early. He is going to be working there for a couple of weeks. He doesn't care where  he goes as long as he is working. I got to visit with him today for awhile on the phone. It was good to hear his voice and know  that he is doing o.k.. He was waiting on a phone call to get all of his last minute instructions before he leaves. He will find out when he gets there just what is going to be involved. 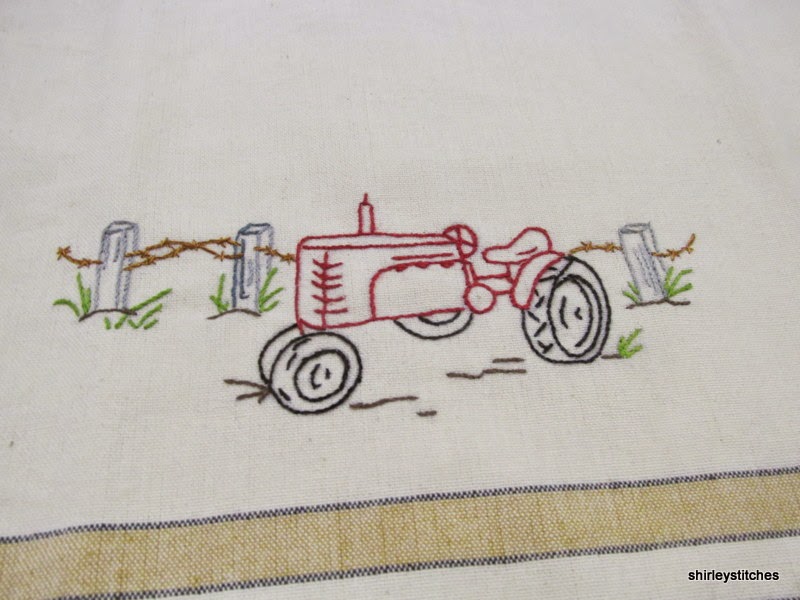 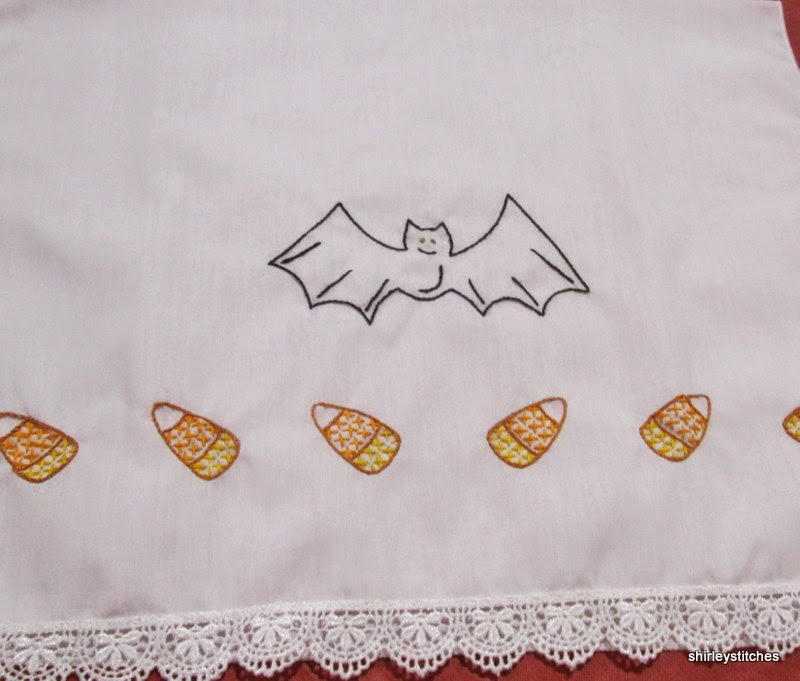 I thought I would show you a couple of my new tea towels that I have finished. I did a show over the weekend. It was fun. It stayed on the cool side and with their air on I wore my sweater. I was just glad that it was in the car. I try to always have one with me because some restaurants and other stores are so cold. I gave out quite a few business cards so will just have to wait and see what happens.  I sold some. It was one of those spur of the moment decision. I thought my bat and candy corn Halloween towel turned out cute. I have  four new ones in my etsy shop. The hands have been busy while I have been at the nursing home.
I don't know if hubby's ammonia level is going up or if we have a medication that is causing his hands to shake. Normally it was a sign that tells me the ammonia level was going up, but there is another medication in the mix and it can cause problems too. They are suppose to do blood work in the morning.They will start with that first and go from there. I will just have to keep asking for reports as to what they find out. I just don't want it to get to far out of hand before the issue is addressed.
It is still hot out and it is 10 P.M.. I broke down and turned the air on. I didn't really want to do it, but I needed to be able to sleep. I will try to do some catching up with you all and I appreciate your visits. Take care and be careful.

A Little of this and that 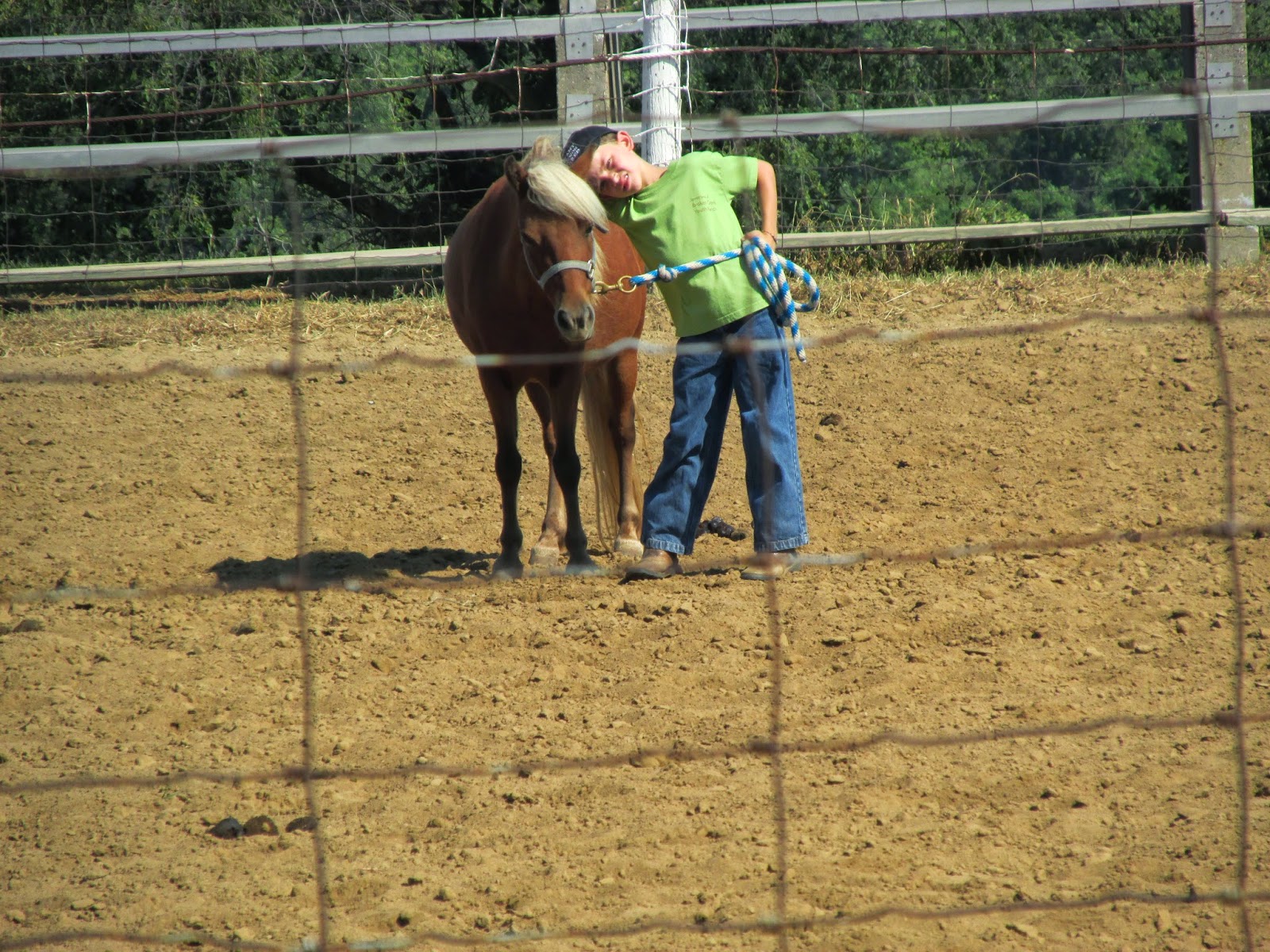 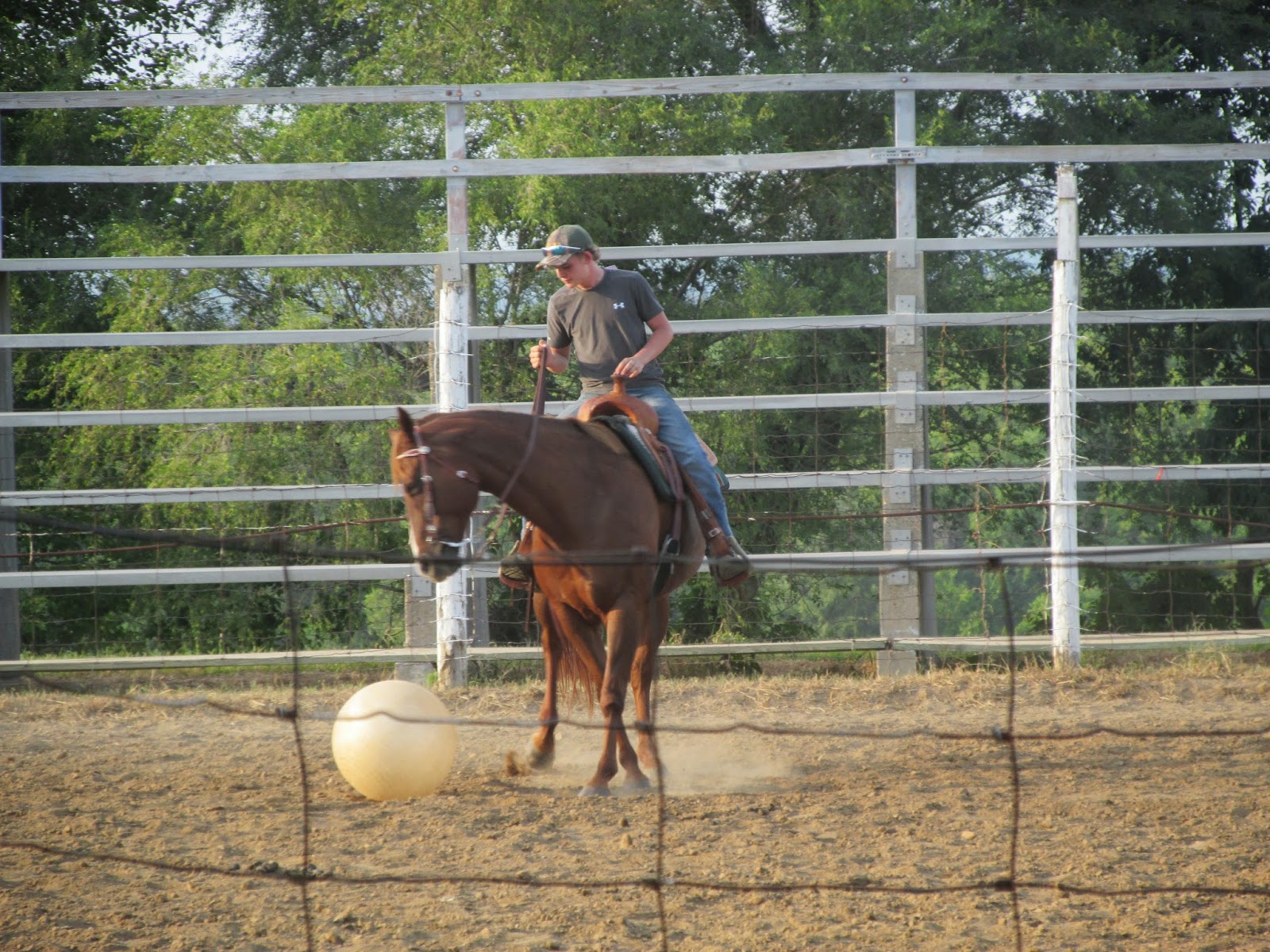 A pony that a little boy can love all over and she just lets him do it. People have wanted to buy her, but they don't want to sell her because she was his first pony. It was hot that day and you can tell he was bored because of the size of the class. It almost looked as though he was going to take a nap. Our two shows have been cancelled this weekend because of all of the storms and rain that we have received this week. We have a couple of places that the water stands which doesn't help.
Tuesday night we had tornadoes to the west and east of us and I don't like being in the middle, but we had the winds,  lightening. A transformer blew in the neighborhood, but it wasn't one that effected me. Some lost their electricity, my sons was still off when my DIL went to work.  I was lucky that I didn't lose mine. I just know I didn't sleep good and I had to be up to go with hubby to the doctor's office. We got a good report from her. She isn't changing anything, but I hate that word "Maintaining". I keep praying for a miracle. I was glad that we weren't down there yesterday with the storms they were getting. We did get headed home before former Vice-President Dick Cheney arrived in town. They were getting ready to block streets. It was awesome to see the huge flag raised at the Broadway bridge as we crossed it and I didn't have my camera with me. 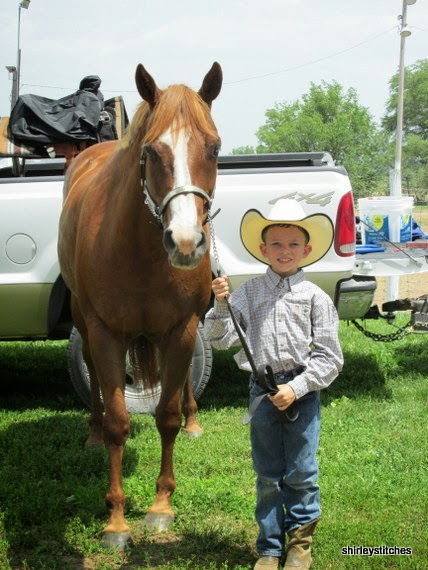 Any body want to play ball. My oldest was trying to get the ball between to cones. You had to do that before you could try the next thing. They had fun.
I didn't get to go to the show this past weekend, but Matt and Fergie got reserve high point in his age group. Really proud of him and brother missed reserve high point by one point because he didn't get his flag on the inside of the barrel instead it was hanging on the outside. He did get first in poles which made him happy. They had fun and that was all that mattered. Dad got be a dad for the boys and enjoy it instead of having to do other things. It is the same day that Platte County uses our arena for their 4 h show. Normally he had to be there, but the V/P filled in for him and did a beautiful job.
Another humid day with possibilities of storms again today. Hopefully it waits until my youngest grandson gets through with day camp for scouts. He couldn't miss summer school because he was going to get to be on the computer. We all know how important that is right.
I am not looking forward to going to the nursing home today. I have to address a couple of issues. Why can't people just do their jobs like they are suppose to do. I have the feeling that I will probably just get lip service, but I won't go away until they address the issue. At least this year he can watch the fireworks out his window if he wants to instead of going outside.
I need to get going so I had better bring it to a close. I appreciate all of you who take the time to read my ramblings and leave a comment. It means the world to me right now. I will keep popping in and out of your blogs, just be patient with me. I got my custom order done and is ready for delivery. Have a great weekend. Be safe and careful. The storms pop up really fast.