UPDATE ON MY GRANDSON

My grandson has a moderate concussion and has to remain quiet for two to three days. No tv, cell phone, or computer and preferably stay in  a dark room with someone to staying with him checking on him every little while. They did a scan at the hospital, but there is another test that needs to be ran He has to go to the doctor on Monday. I know my heart felt like it was in my stomach. They had just started his western pleasure class when it happened.
It was windy today and a chair blew into the metal fence that is around the arena, just as he was starting to put her into a lope. Needless to say she took off bucking and running. He stayed with her until his foot came out of his stirrup and that is when he went off landing on the side of his head and shoulder. He will have a black eye when he goes back to school. No broken bones but he will be sore. He almost had her back under control until his foot came out of his stirrup. I have to give him credit for the awesome job of trying. He had won first with her in halter showmanship so his day had started well at the show.
Of course little brother was worried about him. He told me that he couldn't even tell him what month or what day  it was.That really bothered all of us so the decision was made to take him to ER. I stayed at their house with little brother and dad until they got home and I saw him for myself.

It is getting late and I need to try to get some sleep, but I thought I would let you know what I know now. I will let you know more when I do. Take care.
Posted by Shirley at 7:57 PM 15 comments:

My oldest grandson got thrown from his horse this afternoon. They are on their way to the hospital to be checked out. Will let you know more later.

I have been a little busy lately. School is back in session for all of the boys so I should have more free time after this week. I have been getting up at 4:45 of a morning so that I can be at my daughter's before she leaves for work to stay with my youngest grandson and take him to school.  I went with her and him the first day of school so I would know where to go when I took him to school  and  what to do if I needed to pick him up at school for any reason. His other grandparents will be home this weekend and start taking him to school next week.  I  came home and made some notes because I am dealing with three schools with the boys if it falls on me to pick one of them up for some reason.
We have had a busy city with the Kansas Chief's  training camp being held at our college entertaining all of their fans. You had to plan to do your errands while people were at camp watching them practice. .
Then our 139th Air Guard had a softball tournament here in town the same weekend along with tax free weekend. Talk about crazy traffic. I tried to stay out of that as much as possible.
I had planned on doing what I wanted with it being my birthday today, but ended up going to take care of some things at the nursing home. I think they were surprised when I told them I would be up in a little while after they called me. I think they thought we could deal with it over the phone. The surprise was on them.
My grandson and his horse got to play with cattle. Cleo had never been around cattle before so it was a new experience. She did very well for her first time. It was muddy that weekend. We finally put together nine days of dry weather until yesterday when we got an inch and a half of rain in a very short period of time. When it came to game time at the horse arena this past weekend it sure was dusty. It made you think that you were following some one on a gravel road. We could have used a little of the rain to settle the dust. \ 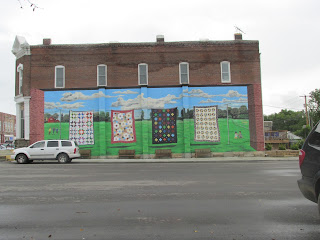 This is another picture that my grandson took while we were Hamilton, Missouri. This mural was painted on the side of the building.  We just wish that we could have got a little closer, but my little camera  does not zoom out that far.
I have talked to all of my family today as they all wished me Happy Birthday. I have pictures of the boys on their first day of school. I just don't know how to get them off my camera. I am open any comments that you can give me. Next week I hope that things will be more back to normal so that I can visit more of you. Take care.
Posted by Shirley at 5:17 PM 8 comments: 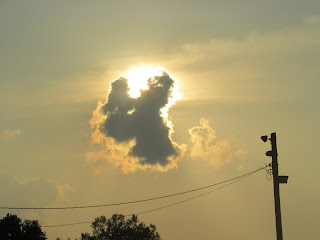 The clouds passing in front of the sun and wondering if it was going to rain some more or we would get the ranch rodeo in that night. Another horseshow was rained out today. I keep joking that we are going to be showing at Christmas in the snow. I have never seen such a wet year in a long time and the floods can't be blame on other people. My brother had over 20 inches of rain at the farm and we have had more since then. It just makes you wonder if it will stop. His garden got way to much rain so they didn't have the usual vegetables that we can normally get from him. 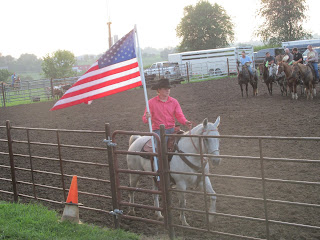 They did have the ranch rodeo in the mud about three weeks ago and it was a good thing or there would have been some of the cowboys getting hurt. They performed in groups of three all of the events. It was like working on the ranch branding cattle, sorting cattle and etc. They would have been doing a lot of walking if they actually worked on a ranch because every time they dropped the reins their horses headed for the gate.  My grandson got to do the grand entry that night and help work with the cattle making sure the right numbers got into the arena. He had never done that before, but him and his buddy did a great job of helping out. I was watching a little one who couldn't been much over 3. He roped his brother and it took his mom and sister to help get his brother out of the rope. He was a stout little one and you could tell he definitely knew what he was doing. Such a cutie.
This past weekend was our family reunion. Three of us girls and four of my brothers with our extended families were there. I got to see some of my great nieces and nephews and their little ones that I hadn't seen for a long long time. We had a really a nice visit and the time just went much to fast. We had several three generations present.
School is almost up on us. I have a week and two days with my oldest two grandsons and I will be taking my youngest to school in the morning  until his other grandparents get home vacation. My daughter started a new job this past week. It was scary there for about a month, but the company called her. She was going to put her resume together after school started, but the opportunity presented itself and she took it. It is different. A smaller company but does the same  type work. Just thankful the prayers were answered.
Well hope to be back to normal in about three weeks for sure. I have already made up my mind that I won't go every day to the nursing home. He slept all afternoon today. All of you take care and I will be coming to visit.