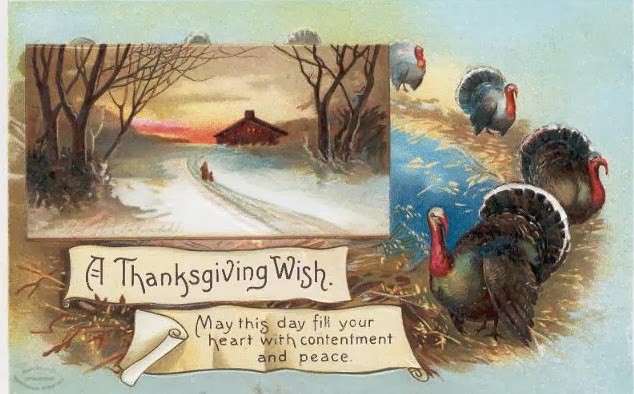 The weekend was very busy with a craft show and two ballgames in one day with my middle grandson. They played in a tournament. The coach wanted them to get their feet wet as the saying goes.
My craft show was the one I have done with my oldest grandson for the last 4-5 years. People could not believe that he made his wooden animal puzzles. He started when he was ten. I would love to have his wooden jewelry box that is made out of cherry and maple. The ribbon that is made on top of the box is a maple and cherry stripe. I would like to try them in my etsy shop, but he won't say yes or no. We both made more then expenses which made me happy and I spent the day with him.
We got back in time to go to the basketball game. I just didn't realize what was involved in the basketball tournament. We started at one location and after winning had to go to another location. I didn't go on Friday night because I would have never made it up the next morning. They won 1 game out of three. They have a decision to make whether they want to play in two leagues both on Saturday. It would take up most of the day.
Have you made your Thanksgiving plans yet? I am going to go to my son's outside of town. My contribution will be the crescent rolls. I don't know what the rest of the menu will be, but we always have more food then we can eat. I asked dad if he wanted me to bring him some and he said no. He said he ate to much at the family Thanksgiving Dinner at the nursing home.
If you travel, please be safe. Two senior boys from my grandson's high school lost their lives in a drowning accident. They were hunting and drowned in a farm pond. Nobody will ever know exactly what happen, but it was a shock for all. Even those of us who didn't know the boys can feel the lost. My grandson knows both of them. They were going to have counselors at the high school today and tomorrow for those to talk with about the accident. It is always hits harder when it is a child regardless of age.
My goal for after the holidays is to blog more often. I miss being able to spend the time visiting I would like to do. I will make this short. I have one more craft show to do with my daughter-in-law. She had planned on going to the last one, but instead needed to take care of the basketball boy.
Take care and have a Happy Thanksgiving.

A DAY TO REMEMBER 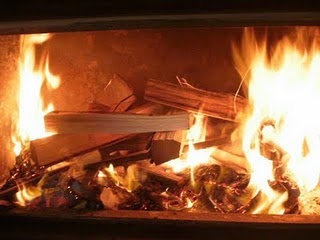 A day to say thank you to all of the veterans and military personnel that have served and still serving to keep our country safe for us.
I know what it is to be a military mom, sister, and aunt to have family members in harm's way. We keep saying prayers that they return safely. 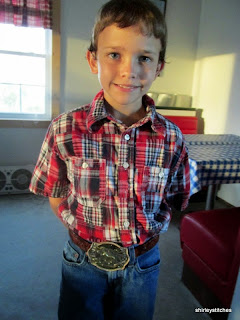 Today is a day to curl up in front of the fire with a good book or embroidering or what ever. We didn't get much snow. but we did get black ice. It isn't warming up very fast. I need to replenish my tea towels.I did
a craft show on the spur of the moment on Sunday. It turned out to be a pretty good show for me. My next one will be in a couple of weeks. The first thing that sold was my horses tea towel. I have sold a lot of them. Why do people want to know where you find your supplies unless they want to try to copy your work? I just know if I want something variegated I make my own.
My grandson with his high point buckle. He was so proud of it. The second picture is up close of it.  I went to their house Sunday evening to celebrate his dad's birthday and had supper with them. I got to see him go through his exercises that they do. For one he sits in mom's rocking chair and shoots a Nerf gun at targets. One was sitting close to my foot he like shooting at that one. hehe. 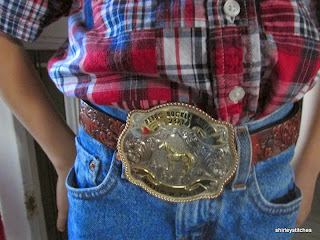 I went to Kansas City with them yesterday. I am glad that we went yesterday. We probably wouldn't have gone today. We went to the Corner cafe for lunch. I brought home a sticky bun that I split with my son. It was so big that you could have made four meals out of it.
It was a good day, but when that temperature dropped it was quick. Enough of this and that. I am feeling much better, but for a few days I felt horrible. I hadn't been sick like that for a long time.
Hope you all are well and if you have the bad weather and don't have to be out. Then stay home. Saying prayers for all of those in need. Take care