Up Date from my house 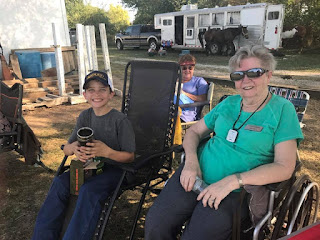 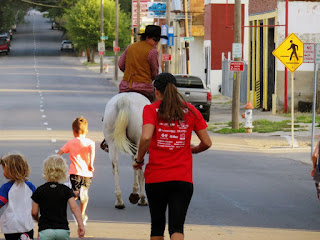 Fall weather feels more like it is getting closer to winter weather. It has been getting down in the 40's at night. I know that I am going to feel when it happens with my leg. It is progressing. I actually got to try a quad cane for the first time. It was different and needs practice because I sure don't feel secure with it. I have also got to hold on a railing and walk. When I get to end of the railing then I walk sideways holding on to the railing back to the starting point. I just try to improve each day. My dream is to walk like I did before I had my accident.
My grandson seated with me at the horse show is now just a half inch shorter than me. Soon I will be looking up at all of my grandsons. He told me he is going to try out for basketball.They have both an A and B team. He doesn't care which team he plays on he just wants to play.  I  will go watch if someone comes and gets me.

My oldest grandson is now away at school He played Johnny Frye and led the Pony Express 5 k run. Cleo wasn't too sure of the drone that a guy had there, but they managed just fine. They could pet his horse, but they didn't get to ride even though several asked. They brought Hot Rod home so he rides every night that it is warm enough and not raining. He is working with him so he will be easier to catch. The two of them has really jelled.
They are supposed to have a trail challenge if it doesn't rain this Saturday and then the awards supper. I am hoping I will get to go but I don't know about it yet.
We had a little excitement today. The ambulance came for a lady and not ten minutes later the fire alarm went off. They said a smoke alarm battery caused it. It is not fun to be on a second floor without an elevator when you use a walker. Yes, I know you can't use them until you get an all clear.
One of my neighbors told me that they have had money taken twice from their apartment. They even had it in a lock box in their apartment. They told me to be sure to lock my door and hide my valuables. I don't have to worry about money because that is one thing I don't keep here. My daughter pays the bills. She comes and we discuss what to pay and when. I don't know who I owe money to of them because they have all done things for mom.