It has been a while since I have been here. I have been very busy with custom orders, dealing with hubby's problems, and started staying with my 11 year old grandson while brother works.
Today has been a day of storms. So far we have been lucky and had heavy rain, small  hail, and some flash flooding. Looking at the radar weather map, it will be a bumpy night. I hate the storms when it rains with all of the thunder and lightening at night.
I wasn't suppose to know, but it slipped out that my oldest son is flying home tomorrow and will be here until Monday. We haven't seen him since Christmas. He is coming in for a job interview which I am praying that he gets. He will be closer to home and family. Right now he works 13 days and gets one day off. Of course, his nephews are on cloud 9 that he is coming home. My middle grandson wants him to spend the night with him. He will even give him his bed. He  will only get to see a video of his nephew loping his horse.
We got in our first horse show of the year last Saturday. Matt got 3 seconds and one third with T biscuit. He did rather well since he hasn't been riding this horse that long. I got to take him one night to his lesson. We got his lesson done and his saddle put away just as it started to rain. It rained all the way back to town. He likes loping now. He started in the round pen and gradually got to go to the big arena. His dad showed Juliet in two classes and got third on both. Big brother had to work so he didn't get to show. Juliet is his horse and that was why dad showed her. Hopefully he will get to do so the next show if we get to have it. We need for the rain to stop.
My fingers have been busy with making towels for a wedding shower gift. The wedding is a week from Sunday. It is outside so they hope that it doesn't rain, but you can't tell the way they have popped up today.The shower is this weekend. It was suppose to be next spring but they moved it up. The groom enlisted in the service and he wanted his bride to be to have the spouse benefits.
I have made five nurse's Saving Lives tea towels. I am hoping to put one in my etsy shop. The others have gone as graduation and wedding gifts. We have a couple of nurses, a doctor, and a physical therapist in the family now.  It makes you feel good when they put the effort into those fields.
It is getting late and I have to get up early in the morning so I will say goodnight. I am still here. 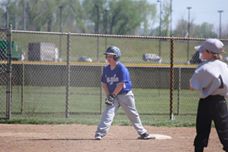 Happy Mother's Day to all of the mom's out there. If your mother is still living, take time to give her a call even if you haven't always got along. You don't realize how much you will miss her until she is gone. You wish you could see her just one more time for her to show you something or give advise.
My grandson in blue waiting for someone to get him home at one of his ball games. They have won every game they have played so far. This week we will see how they play when they have three games back to back. Of course grandma has to go watch. It is fun to see how many grandparents that are in the audience that I know watching theirs play. Fun time. School is out for him this next week. The school year has flown. If he makes the A honor roll, he wants to go to Lambert's for supper. He is trying really hard. They have a copy of his birth certificate they take when he is playing because he looks older then 10. His mom is my wake up call. She calls every morning to check on me as she is going to work.
The fingers have been busy with custom orders while I sit at the nursing home. I took yesterday to stay home to get some things done, but other then that I have been there every day trying to get them to listen to me that there is a problem going on. I get so tired of hearing that it is his age. We are going to have a swallowing test done on Monday to see if when he swallows it goes to where it should. He has been coughing and it hurts when he coughs. I want to know if he has pneumonia. I know his ammonia level is back up. They were suppose to do blood work to see if that is going back down. If it is not one thing, it is another. It just gets very frustrating.
My oldest grandson finally has a job working in the evening busing tables at a restaurant. He works usually Thursday, Friday, and Saturday evenings. His schedule changes so he has to check to see when he has to work. He has to help pay for the repairs to his truck. At least he is doing a lot of it under supervision at school which ends this next week for the summer. He will be able to mow my yard in the afternoon because he will only have class in the morning. I get to stay with his brother this summer. We will have fun.
My middle grandson got his hearing aid and it has helped with the ringing that he was having constant in his ear. He only wears it at school which is fine at the present because of the newness.
His accomplishment is he has learned to lope his horse he is going to show this summer. He keeps improving with each lesson. I am anxious to watch the boys ride this summer. They start the 21st of this month.
I have been trying to visit you all, but time is limited right now. I hope you all understand and say a prayer for us that we get some answers. Take care and have a wonderful weekend.