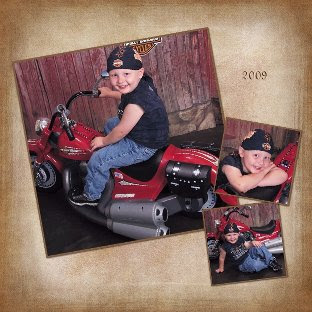 My daughter had his pictures taken on a Harley Davison bike for little kids. He had a small motorcycle that burned in their garage fire that his dad had found at a garage sale and was waiting for him to get a little older so he could ride it. He will be 4 years old his birthday. His dad has a motorcycle and takes him for a ride. You don't want to say ride because he is right there with his helmet and protective glasses. They got him a new helmet because his was to small. His dad's brother and sister-in-law both have Harley Bikes and they all belong to a group. They took him to the races this last weekend at a dirt track and he absolutely loved it. He stayed awake for the whole thing, but in the last race he was ready to come home about the 8Th lap.
He had gotten his new sand box today and we had to come down to see it. We are going to baby sit him this Saturday which will be a lot of fun. He wasn't ready for his pre-preschool to come to an end because he had other little boys to play with. I just wanted to share his picture with you all.
Posted by Shirley at 7:51 PM 1 comment: 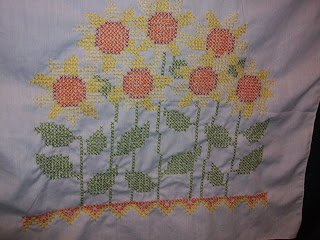 I thought perhaps I should let you know I am still here. I haven't blog for a few days as I have been busy at the doctor's offices and work. We started the long weekend with closing early, which just means more to do next week. The reports were good at the doctor's. The lab reports came today in the mail, but wasn't anything different then what I was expecting. I can pretty much tell when things are going backwards, but we have dealt with his illness for almost ten years.
I did get another tea towel done so I accomplished something while going back and forth.
We went down to see how the kids new garage was progressing. Our son-in- law was going to paint his new garage doors this weekend so they can install them on Tuesday. They are about ready to pour the concrete floor, and it is really going to be nice. Our daughter is looking forward to be able to park inside this winter so she doesn't have to clean off the snow. He is getting anxious to be able to work again. The doctor is really proud of the progress that he has made since they put his stint in.
We saw up close what a tornado can do. We were in Kirksville, Missouri where the tornado went through. The new houses were in shambles with some in a pile of rubble. To think you work hard to finally get your new home and have it destroy. The important thing is that you can replace a house, but you can't replace a human life. A new car dealership didn't have a window left in their building and damage to the cars. It makes you thankful that we didn't have it. We were looking at the flood damage also. A lot of rivers and small streams were out of their banks. We had flash flooding here in town. It was very unusual to see a car stranded in Star buck's parking lot because of the water. It is in an area which isn't suppose to flood, but with it coming so fast there was no time for it to run off. We watched it rain sideways and the wind was strong.
I don't know where our adventures will takes us the weekend with my having a three day weekend. I just know we will be on the road to somewhere. Have a safe Holiday. 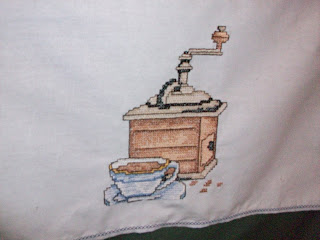 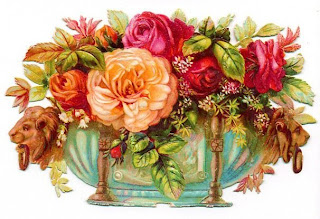 I wanted to sho 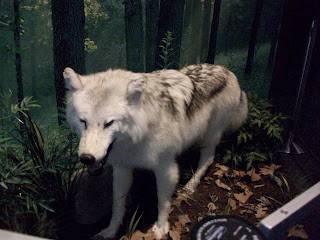 w you my latest creation. Anyone for a cup of coffee 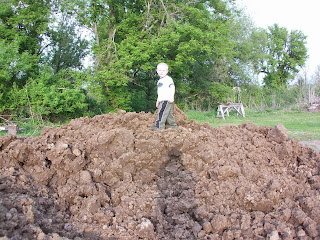 with old fashion coffee grinder. My grandmother had one of them when I was growing up.
A bouquet of flowers is always fun to receive. They are great addition to any table or room. The lilacs smell so good at this time of the year. Of course they don't help the allergies.
We went to our new Nature Center yesterday for my sister's 50Th wedding anniversary. The White Wolf was one of the exhibits. It was our first time and if you are ever in our neck of the woods, I suggest that you go visit. It is a really neat place, plus you can sit and watch the river if that is what you like to do. We got to see family that I hadn't seen for awhile plus seeing my brother-in-law's mother, brothers and sisters, who I can't remember when we saw them last. My nephew had made a slide show and the pictures they found were really fun to look at.
Our youngest grandson was playing king of the hill. He had no problems climbing the dirt mounds, but getting down was a different story. He wanted your help getting down, but I learned the hard way that when he got close enough to reach your hand. He would just launch himself at you to catch. We didn't fall thank goodness.
I haven't figured out how to get some of my print in between the pictures, but I will keep trying. You all have a wonderful day for what is left of it.
Posted by Shirley at 10:46 AM No comments: