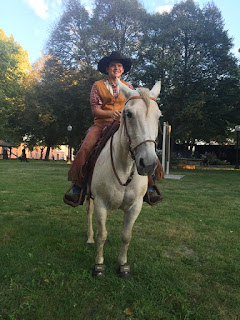 It has been busy with doctor appointments with  my hubby. He still has  more to go. He has been sick with this horrible cough and what they put him on is causing more problems.  It makes you really wonder about who is taking care of them. I get so frustrated and feel like it is just lip service.
Today all he wanted to do was sleep and his answers were not making sense. The nurse put a hold on the medication they put him on and some of his new problems may be linked to that medication.
Today my oldest grandson got to be Johnny Frye and lead off the Pony Express 5K run. He had a police motorcycle escort in front of him so they didn't have to worry about vehicles coming through while this was taking place.  The picture of the arena is of our horse club's arena at sunset. 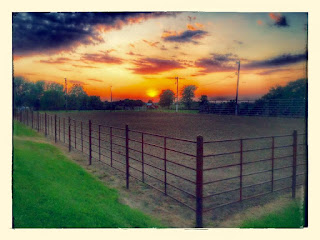 The last event I think this year will be a fun show strictly games. Some I am curious to see such as the catalog race. I have never seen that before.
We have had rain this evening and are suppose to have storms going into tomorrow.
I sometimes wonder just what our world is coming to with all that is going on. I don't know about you all, but I will be so glad when the election is over with. It is though they think we aren't smart enough to make up our own minds.
The fingers have been busy and have to stay that way. My embroidery, I think at times is the best stress reliever. Even to help lower my blood pressure, but who knows.
Why can't people admit when they make a mistake instead of blaming it on everybody else? I was told if you made a mistake you say that you did. Well, enough of this and that just wanted you to know I am still around just busy. Take care/

I am still here 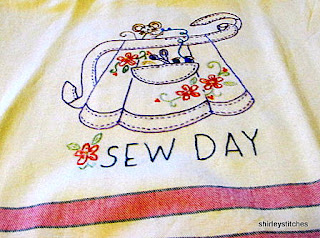 I am still here just have had a lot going on in my life that required my attention. We have had between 6-9 inches of rain and it is still raining. I wish it would stop. Water in basements and some flash flooding, plus flooding. The rain just came too fast.
The summer went entirely too  fast and the months seem to fly by with a blink of an eye. I didn't  really care for the heat, but then we can't be choosey.
The fingers have been kept busy to help keep my sanity or at least that is what I say. I have had two shots put in my knee because of arthritis but is not bad enough to require a knee replacement. I had a scare with my eyes because of them blurring and couldn't figure out. It turned out to be there was scar tissue behind my implants from the cataract surgery. They did a laser treatment on both eyes and my vision is back to where it was before.
I just hope my doctor appointment tomorrow goes okay. I need some answers about where I need to try to keep my blood pressure. I don't want it to get to low. 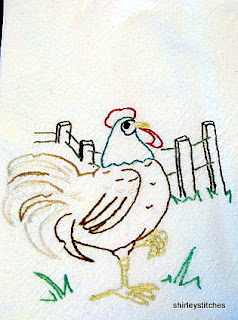 Hubby is doing as well as can be expected. They are basically just trying to maintain him. His ammonia level keeps going up so it takes longer for him to think what he wants to say, plus gets confused at times. It is hard to watch. I keep praying for a miracle. He still thinks that he can get his hip redone and walk again. Even though we have had four doctors telling him that it is too risky and he could be in worse condition than he is now or lose him on the operating table. I told him that I do not want to go to another doctor.
Tears fall in private except when I get terribly mad and then I cry.
My grandson is taking me on a road trip again this year next month. He is making plans on what we are doing. They couldn't get a cabin like we had last year so we are staying in a condo. As it stands right now, I think my daughter and her family are going to go also. It should be fun to have the family together. 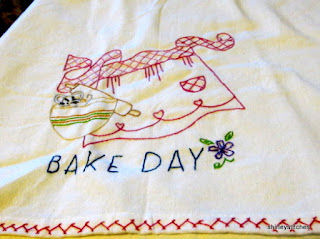 We were all together last weekend and had supper cooked over the fire in a dutch oven. It is called a harvest meal and is so good. My daughter in law made her version of apple turnovers. She took crescent rolls,
put brown sugar over them. Then rolled a slice of apple in each one sprinkling them with cinnamon than  baking them in the oven. They went really fast.


I thought I would show you some of my handiwork. I really must close for now. Take care my friends.