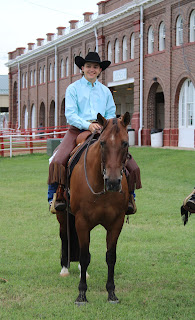 I spent 4 days watching him ride at the state 4-h horseshow in Sedalia, Missouri with his family. I rode down with my oldest grandson. We were hauling the 4 wheelers. We had a convoy in front of us and behind us were the trailers with horses. My grandson showed two. The classes were big and it was an honor if you got called back.  His last class of the day was huge. He ended up in the top 14 which was an honor.  He has one more year that he can show with this being his senior year of high school. His last show of the season will be this coming Saturday and I am hoping to feel up to going. 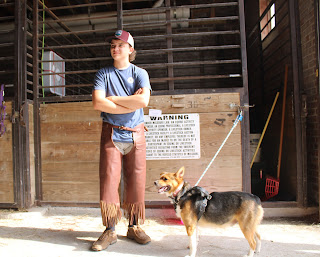 The latest fashion while we were gone. He tried on his chinks to see if they were going to need an adjustment before it was time to show. I couldn't resist taking his picture with our guard dog. He goes to the shows with us and you don't hear a peep out of him if he can see the kids in the arena, When he is at our local shows he sits in the announcers booth so he can watch. I heard him do a low growl for the first time while we were there. It was something about who was talking to us that he didn't like.
The only scare was when my oldest came back to the motel and the first responders, ambulance and fire truck was all setting there. He came flying in and asked if they had a medical emergency. They told him yes and he came flying up to our room. I was laying in bed sound asleep. I can relate to that.
I hadn't had been sick all during covid until about a week ago. I started having the coughing spells where I felt like I wasn't going to stop, but I am doing what I should and the doctor said that he would not prescribe anything else. I am staying away from people because I don't want to give it to them.
I didn't get to celebrate my birthday the way I wanted, but I did turn 81 on the 19th of August. I am just thankful that I am still doing the things that I like and go every chance that I get. I just miss being able to drive, but I can understand why my kids don't want me to anymore.
I moved a year ago this last February into a 55+ senior apartment that was brand new. I have a one bedroom with a washer, dryer, dishwasher, stove, refrigerator, and microwave all furnished. It is the right size for me. It is on the first floor close to an outside door.
I am still embroidering my tea towels or whatever I decide to work on next. I usually have two or more projects going at once. Take care.

I love hearing about your life and the things you do! I look forward to your daily postings every morning on Facebook. Doing all that you do and staying interested in Life is why you are such an amazing 81 years old!

Well God bless you Shirley! I had almost given up on another blog post from you my dear.
Your grandson is a handsome young man. I am glad you are recovering alright now. You take care.

I enjoyed seeing a post from you. Glad you are doing okay and spending time with family. Sorry about your cough and hope it goes away quickly. I'm happy to hear you are still doing your embroidery. I really enjoyed seeing your work when you shared posts about it. Happy Belated 81st Birthday.