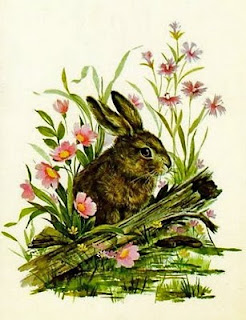 The cemeteries are getting so pretty with all of the flowers and flags. The traffic picked up and you knew that  was where most people were either going or coming from. It is a time to remember those that gave their lives for our freedom and those of family who have gone before us.
The little rabbit is what I saw peeking out of my neighbor's flowers this morning as I left the house. He just set there and watched me as I put my things in the car. I have several rabbits in my yard. They are liking some of the plants. It makes me wonder if I really want to try to plant any this year. I don't really have the time to take care of it.
I have been very busy running this week and had a scare. I thought maybe I had the starting of shingles, but no rash or blisters so I was lucky. I made a trip to the doctors to be on the safe side though. I got to go to my middle grandson's award assembly. Mommy couldn't go because of having to be off work so much with her dad. It was something that I had never been able to do because of working. She and I compare notes about being a caregiver. She said it was something that she never thought she would be at her age.
I went to the ballgame Friday evening and they won. They really played hard. It was a fun time then we went to supper after the game. It was grandma you are going  so I did. Last night we had a cookout and then they burned the old school building that they had knocked down so that they did not have to worry about one of the little ones getting hurt. I could see my grandson being one of the ones that would climb on the roof even though he knows that he would maybe get hurt. With it gone, they don't have to worry about it.  The wind died down so they could and you could see it for miles around. Had a lot of people who drove by to see what they was burning. Tonight after the nursing home I am going to go eat hamburgers on the grill at my son's house. They all look after me. I had to call them last night to let them know that I made it home o.k.
I hope you all are enjoying your weekend. Have a safe one if you are traveling. I will be around to visit all of my friends and welcome to my new followers. You all mean the world to me.

We went to the cemeteries yesterday and I saw a rabbit hopping happily around the flowers on the graves. They both looked pretty with quite a few flowers already.

It is so nice that you have family nearby and know they are looking out for you. Take care!

Shirley, if you don't mind me asking - what did the doctor say it was? (you can email me if you want). I only ask because my Aunt had shingles years ago. Last week she started complaining that her arm felt like it was burnt. This went on for days but no rash or blisters. It has been a week now and it still hurts. Feels like shingles but no visible signs.

So glad you are having good times with family. Enjoy your day Shirley. God bless you and your husband.

Shirley I'm glad you were able to have some special time with your family over the holiday weekend. You are always running to and fro-- I'm relieved to read that your son is keeping tabs on you girlfriend--

Eggs In My Pocket said...

Sweet post. Hope this finds that you had a wonderful holiday weekend!