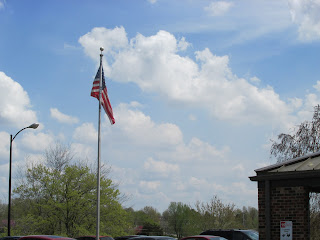 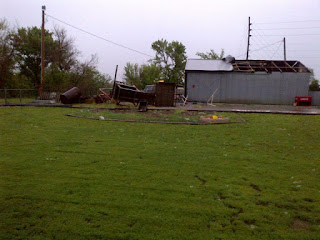 Our day started out with a pretty day, but sure did change in a hurry. We live in what is known as Tornado Alley which the storms normally start in Oklahoma, who has had more then their share the last two days. It has been so bad and my heart and prayers goes out to them. Also Wichita, Kansas, Kansas City, and us all have had the storms some of which was more severe then others. They say ours was straight winds clocked at 72 miles a hour, but the trees looked  as though the branches were twisted off or pulled out of the ground. We had trees  down all over our city , no electrictity in certain areas.Trees on houses. I know that it got real still before it hit. There was no air moving at all. The wind didn't really sound like a train, but it howled with heavy rain and hail. It tore down big signs. The picture with the storm damage was taken at our daughter's house. Part of the roof was laying on a power line. The swing set is in shambles, but the best part was that they had just moved their camper to a new location or it would have been there by the garage. We were lucky.
My heart and prayers goes out to the people in Oklahoma and Kansas who are suffering right now. The pictures were devasting and it makes me think about our children here. None of our schools have an area to take the 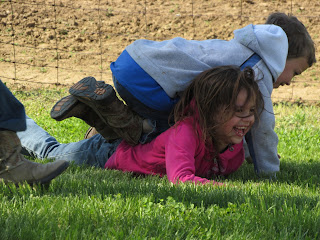 kids other then the hallways in the center of the buildings. We are getting ready to build two new schools and I hope they took that in to consideration when they drew the plans.
The picture of the two wrestling is my grandson and his little friend. They don't hurt each other, but she is on him and then he is on top. They are so much alike. If you see one, the other is not that far away unless he is on his horse. They have so much fun together. Her parents call him their adopted son because all they have is girls. 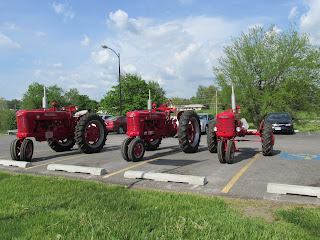 They had Country Week this past week at the nursing home. They brought three tractors in for the residents to look at. They were going to have some other tractors, but they needed to be in the fields planting crops. They try to have entertainment for them. They were a 1940, 1943, and  a 1947 farmall. At least the sun was shining that day for them. They had ice cream like the ice cream social to give them good memories.
I will continue to pray for my friends and family that have gone through so much here in the last few days, Take care

Praise the Lord you and your family are fine.
I recall Ice Cream Socials from when I was a little girl. =)

I am so glad that you and your family are well and minimally hit. I join you in prayers for all the families who lost family and homes in these storms. That is so cool that these tractors were taken in - my dad would have loved them!

I'm glad that you and youamly are okay. I hope you don't have to be withopwer for long. Last year we had those strange winds that knocked our power out for a week. Nothing like what happened in Oklahoma. So devastating. We are supposed to get a stowm here in a few minutes. I think everyone is nervous about any sstorm right now. Prayers for all in the storms. You grandson and his friend are cute. I hope that they always stay like that.

My heart is aching for those families who lost loved ones in the path of the devastating tornadoes!
Mary Alice

Shirley, I am glad to read that you and your family are all okay. My thoughts and prayers are with those in the storm ravaged areas.

so happy that you are ok!

Thank God you are alright! We just had one storm here where I live. But like you we are pretty used to those monster storms. Nothing like what they got in Oklahoma though! That was horrible. All those poor people and animals. I couldn't even watch the news. Too sad. Makes you thankful for each day you get. Take care of yourself Shirley.
hugs♥,
Caroline

So glad you are OK.This has been some week. Tornado's, bridge collapse. I am afraid to turn on the news.