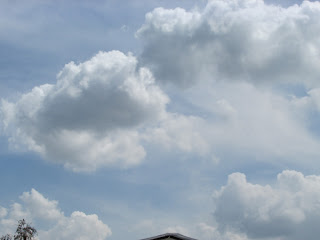 The clouds are here today and I am hoping the weather stays nice at least through today and tomorrow. They are saying we are in for some severe weather. I heard on the news about Louisiana this morning. My son's phone went to voice mail so I am waiting for a call back to make sure everything is alright with him.
My heart and prayers goes out to all of those in Texas who were devastated by the tornadoes losing their homes and love ones. The storms may not last long, but they can cause tremendous amount of damage in just seconds. 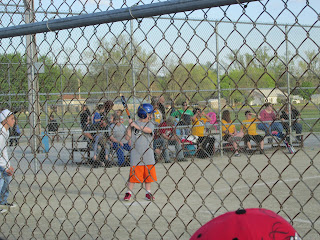 This is where I will be this evening watching the ballgame. He has already invited grandma to go with them to dinner after the game. I don't know where we are going, but he will let me know. It is so much fun to watch the little ones. I still think my favorite time is when they are playing t-ball. They start them so much younger then when my kids were that age. I think sometimes they rush the little ones just to fast.  It should be a beautiful evening to set there and watch the game. 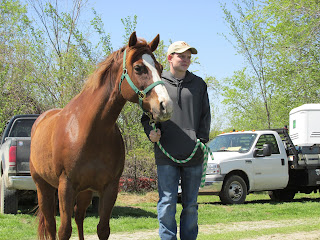 Big brother with Fergie watching his little brother in the arena. He didn't know grandma took this picture. It was his responsibilities to make sure little brother was ready to go along with the horses. Both mom and dad were busy with their responsibilities for the day. Dad is the president of the club so he had a very busy day. He finally got home that evening between 9 and 9:30. He had to make sure everybody got their horses loaded. Mom took the boys and horses home earlier. 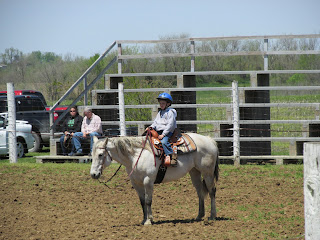 Little brother waiting for the results of the event. You can tell that it was cold by the way everybody was dressed. The wind was so strong. There would have been no way to keep their hats on. The way it was the wind coming through the metal bleachers made you think an airplane was coming after you. The horses weren't to sure they liked that sound. I left to soon and missed my oldest grandson riding tandem with one of the girls in the games. They did a good job. They got first. The boys had a variation of ribbons and they had a good time. 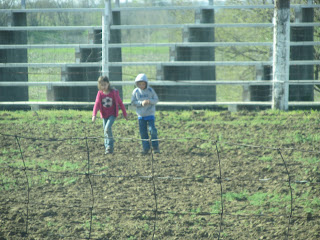 I would loved to know what my youngest grandson and his little friend were talking about as they walked around the arena. They were fixing the jumps for the jumpers that day so the kids were out there. At least you knew where they were at. They spent the day together excepting when he was showing. She didn't get to show because they were having problems with her horse so they left it home. They didn't want anybody to get hurt.
Lady went back to the farm, she could not get along with Fergie. She tried kicking her way out of the pen and in the process got hurt. She looks a great deal like Cleo in color.
I have a craft show tomorrow. I am doing it so that I can be invited back to do one in the fall. We are inside for which I am thankful for. I have to decide what I want to donate as a door prize. Well I need to get my running done . Have a great weekend and enjoy the sun shine and fresh air.

Oh Shirley, I hope you have heard from your son by now. It may have been hard for him to call out. We mothers can sure worry can't we. So glad that you have all these grandson's to keep you busy and having fun. Good luck with your craft show. Have a good week-end.

Hope you've heard from your son by now...
Have fun at the craft show.

Shirley- your grandsons are so adorable. You must be SO proud of them in their activities-- they seem to be doing so well!
I hope your craft show goes well-- it's a lot of work to participate in those!!