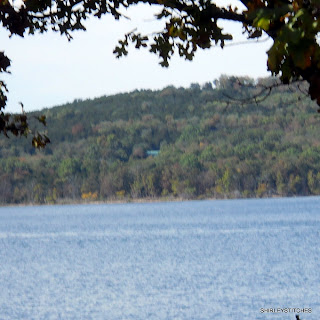 Two days before our son leaves for New Orleans to start his new job. Why do mother's have such mixed emotions when a child regardless of age leaves home? I keep promising myself that I won't cry, but I probably will after he is gone.
He is very excited about it. He says it reminds him of when he was reporting to a new ship.
We spent yesterday at our son's Pat house. We celebrated Matt's 7th birthday and took family pictures of the kids. We haven't done that for a long time.
First my picture is taken looking across the lake at Table Rock Dam. It was a beautiful day. I just wish the vacation could have been longer. 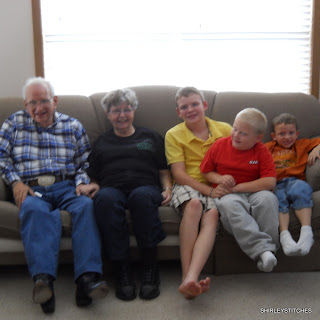 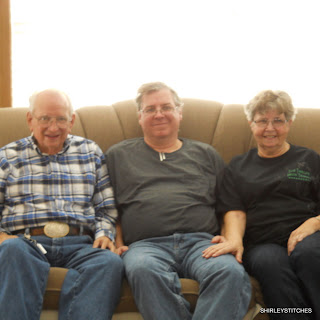 Grandpa and Grandma with their three boys. Matt is the smallest, Ethan in the middle, and Jake our oldest next to me. Jake keeps growing everytime that we see him. He is almost to catch his dad in height. I told him I was going to put a rock on his head to slow him down. I wouldn't that is for sure. We are going to do a craft show together in November. He showed me the puzzles that he had made already and his list of what he was going to do. The next picture is mom, dad and our oldest son who is starting his new adventure. He leaves Thursday morning after his doctor appointment on Wednesday. It is a 16 hour drive straight through, but he will go so far and spend the night going the rest of the way in on Friday. His job is in Kenner, Louisiana.
We will have dinner tomorrow night together then he is going out to Pat's to see them on Wednesday night to play with his nephews.

The next picture is of Jake and his new horse Fergie. She will be a challenge because she hasn't been rode for a while. He rode her down to the house so that grandma and grandpa could see her. He is excited about the coming year. I know already that we will be spending time at the horseshows. The last picture is of Our three kids and grandsons. Hope your week has started off good.
﻿ ﻿

Hi Shirley,
What wonderful pictures of you and your hubby and your kids and grandkids! Aww I feel for you...you're right...it doesn't matter how old our kids get we never get over missing them or worrying about them. Your Grandson has a beautiful little horse there...I bet he has her tuned up in no time. Enjoy the horse shows! Your Grandson's are all sweeties! Have a wonderful time with your family.
Maura :)

You have some beautiful grand boys Shirley! That little Matt looks like he's the happiest little thing!

We truly do always worry about our kids, don't we? I hope your son's move goes smoothly!

Love the family photos!! My children are 40 & 41 & it is so hard to look at them as entering middle age. I still see my toddlers.
Have a Great Day!!
Marilyn

Love your family pictures. You should stop over and enter my giveaway for free photo Christmas cards.
It is hard for us to let our children go away no matter how old they are. That's just our being a mother, but it still hurts.